That said, I think abstracting the NPCs out with an oracle helped immensely.

[In the Room] a pile of alchemical cast-off items, a row of cots, an altar

Whoops. Looks like my map didn't save. Will take a little time to fix that.

I'd commented out the save line, should be an easy fix to push through. Okay, back to the game.

I am trying to keep away from too much detailed exposition and narrative for this one.

Let's roll up the monster in SH.

Well, that's a fight! 2d4 hit dice of Minions plus 2 * T hit dice worth of Elites, Mages, or Boss enemies.

Four minions plus 2HD of Elites, Mages, or Boss enemies.

Well, this is beneath a lair of some sort. Is it still occupied by whoever set up the cots?

So this was originally a shrine of some sort, with an altar, someone repurposed it as a sleeping space -- an alchemist and his guards -- and then it was re-repurposed by whatever creature left the bones upstairs.

So the main creature, I'm going to use one from the Yoon-Suin book of 2 HD, the Thaye, and for the minions I'll use the standard minion stats from

No surprise for anybody, I think, though I may take some dramatic license with it.

Fortunately, the warrior had a rope, and it was trivial to drop down into the hole in the lair. The room below was stone, with ornately carved pillars and an altar at the far end. Cots were lined up in neat rows, holding nothing at all now. "Where do you suppose they've gone?" Issa asked, and Fin shrugged.

Is the altar to a dark scary grim god?

To a good one?

I asked because "Neutral" or "Trickster" were also options.

The Alfar was inspecting the altar. "Devoted to the goddess of war from the early days of the empire, it appears," he said precisely. He looked to be in his mid-twenties but from the way he talked you'd think he was a sour old sage, Fin thought. He was wondering just how he'd ended up in this mess when he spotted a dark shape skulking along the ceiling.

His swords were in hand as he sprinted forward, intercepting it as it plunged down towards the Alfar's back.

In SH, heroes go first, so Fin gets a round of attacks. He's much better off if he can sneak up on stuff.

Second hand is a clean miss though.

Two points of damage, not bad, enough to take it out, anyway.

The creature -- a shadowy thing with tentacles that stank like a sewer -- went down surprisingly easy. Adrenaline surging, he spun as four more crept out of the shadows, swarming towards the three of them.

There's really too many heroes to fit well with SH's power adjustments; I'm going to abstract the other two heroes as oracle questions, I think.

Will have to think how though!

Top of the order, I'll concentrate on Fin's fight. When I call for a morale check I'll also check the status of the other two.

Nice, that's a clear hit on his primary hand.

And a clear hit on his secondary, too.

Only one point of damage, but that's enough to put the already injured one down.

1 more point, plus Fray next.

And a miss, thankfully, since they have a bite that takes effect if they hit with both attacks.

And the second one's two attacks.

Oh, I should have checked morale.

They only have a morale of 7, so they break and run!

I guess I'll ask the oracle how my allies did!

Did Issa defeat any enemies attacking her?

Is Viandus still fighting as well?

So he defeated the enemies on him?

And a hit location for that solid hit on Fin.

Fin cut two of them down effortlessly, dodging tentacles. He caught one across the side of his head, enough to stagger him, but the other two creatures fled into the shadows deeper in the complex.

A glance over showed Viandus polishing off the last of one of the creatures, and Issa, swarmed by more.

How many are attacking Issa?

Fin abruptly realized that the creature she was fending off was not multiple creatures, but one large, multi-jointed one, a veritable hydra.

He's going to use acrobatics to get behind it and use quick death on it.

I'm going to set the DC at 13, which is really hard but not ridiculously so, because it's immense and occupied with attacking Issa.

Rats, a failure. So he's going to be open to an attack, but right next to it for the top of next round.

He sprinted forward, dodging under one tentacle, but the thing was faster than he expected and he misjudged its reach. One of the tentacles snapped out and clipped his hand, almost knocking his sword away.

1 point of damage, and Fray.

Does Issa land any blows?

[above average vs average, 7 ≤ 13] Exceptional YES

He sliced one of the tentacles that was reaching for his face away, then knocked away a second. To his left, Issa swung her greatsword, burying it firmly in the creature's toothed maw, and it collapsed, twitching a bit.

Fin has to make two saving throws against disease, which will take effect tomorrow and put him at a -4 to Strength, Con, and Dex for the next d6 days if he fails.

Was Issa hit at all?

Was Viandus hit at all?

Saving throws for everyone!

[above average vs average, 8 ≤ 13] Exceptional YES

So they're both not going to get sick. Yay. Alfar are immune, it appears. I'll jot that down next to "things I know about Alfar".

Which reminds me, I need to make the actor tracker boxes larger.

Oh, wait, saving throw first. The DC is 9 plus the creature's HD, so 2 for the first one and 4 for the second.

He's one HD and has no relevant modifiers, so that's a failure. Better hope we get out of the dungeon (or to a safe place with food and water) before tomorrow.

Failed the second one, too. Great. Fortunately, it's a flat -4, not -4 per day or anything. Still, it will be weeks before he's able to adventure again.

Issa shot him a grin. She looked a bit marked up but nothing serious. The Alfar didn't so much as have a hair out of place.

Taking a few minutes to bind my wounds.

Fin felt a little dizzy but nothing serious. He'd taken more hits to the head in the past few hours than in his entire life.

Quick look around the room, looking for anything that looks like a wine bottle.

He scouted out the room, quickly, thoroughly, drifting to a stop near the altar. A sudden wave of dizziness struck him and he half fell against it.

Is it magical at all?

Does it activate with a special effect?

Does he get to make a saving throw?

[What Did It Do?] It reduces your age by two categories. You won't be affected until you next commit an act related to the effect.

I should note, I'm not really in the habit of digging for magical effects to heap on my characters -- I just wanted to try the "what does it do" generator out. I am regretting it now.

He's a young adult; that will put him squarely in "child" territory.

"Commit an act related to the effect" which is aging must be, well, aging.

We all get older every second, which means it's only a matter of time. Does it take effect after one minute?

So much longer. One day?

So he's now pretty much going to be direly ill for a week, starting within twenty-four hours, and then wake up a ten year old.

Thanks, random generator. I don't even have stats for that.

The Alfar pulled him to his feet. "Don't touch that," he said, a frown on his face. Then glanced at the statue again. "I may have been mistaken-- but no matter."

I guess I should be glad he's not turned into a frog or suffering a cascading magical failure or an inch tall. Let's get an exit.

[In the Room] a tiled floor, round smooth crystals embedded in the floor

I think that's the last garden room, too.

Though the room with the altar was overrun with vines winding down from above, the rest of the floor seemed relatively untouched. Whoever had abandoned the alchemical supplies and altar seemed to have had a love for learning.

[In the Room] a stockpile, torture devices, misspelled graffiti

[In the Room] a bowl of fruit

Fin snagged a few books that looked interesting, stuffing them into one of the satchels, and regretted he hadn't time to look at them more carefully. But he was getting hungry, and he knew it was getting late.

Fortunately, they found his prize in a small store room off the altar room -- a dusty wine bottle he recognized instantly and well enough to realize he'd been geased to retrieve it. He cursed his captors silently and vowed payback.

Issa, for her part, was thrilled -- tucked on one of the shelves was a bowl of what looked like fake fruit. She announced gleefully that each was a semi-precious gem, elegantly carved, before stashing it away in her pack. Fin was starting to feel more and more queasy and really just wanted to get back to civilization and take a hot bath. 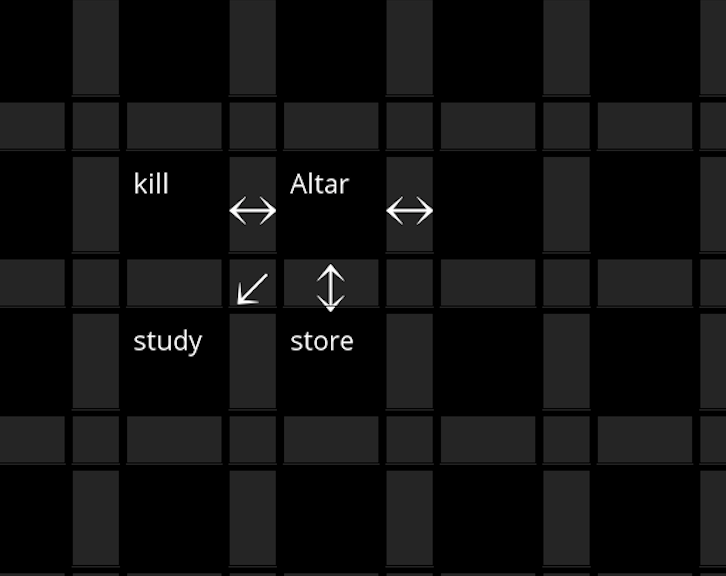 If I were more diligent, I'd add the themes in too

I'm not going to slog through the whole exit sequence, I think. I'll do three rolls and apply them to the following categories: monster encounter, npc encounter, safe trip. If any gets a 1 it means it's failed/happens.

Are they waiting outside for him to return?

So there's a place he's supposed to meet with them. Does the rendezvous go smoothly?

[Modifier] Is in disguise.

I'm going to read "in disguise" as "traveling incognito" rather than literally disguised as someone else.

"You found it," the leader of the gang of thugs who'd hustled him off the ship and up into the mines said. He sounded surprised. And pleased.

He was still sporting the black eye from a lucky kick Fin had managed to land as they were dragging him up the mountain side. Fin had instantly disliked him; he was athletic, elegant, and without a drop of remorse. A lot like the nobles he'd encountered in Cadoc. And possibly uncomfortably similar to Fin himself, though he hadn't yet made that comparison.

Does he plan on letting Fin go?

Well, that's nice. I guess. I wonder who he's planning to murder? Maybe the wine is a rare vintage intended as a gift for someone, once it's poisoned?

"You're free to go, then," the leader drawled, tossing a pouch to him that jangled a bit. Fin caught it reflexively. That went better than expected, he thought. "But don't try to leave the island," the leader called back over his shoulder. "You won't like the consequences."

Ok, back to Whitefell, then, with Issa and Viandus. And then time to start asking the oracle some stuff.