Note: this post is also for testing out some commenting options; if you see this note, I’m still doing it, just ignore anything at the very bottom that looks broken.

It’s possible the world doesn’t need another of these procedures, but I had fun devising it. I am absolutely sure this is “standing on the shoulders of giants” territory, with my own spins. Of particular note are Bastionland’s three step dungeon, Last Gasp Grimoire’s die drop generator.

in pdf form, with the tables referred to below

Edit: the theme table’s last entry should be “150” and it’s intended to be read as less than or equal to the number. Please feel free to roll a d6 instead; I’ll fix it if I can find the source file. Yes, I would lose my head if it weren’t attached.

1) Drop 7 poly dice on a piece of paper. Toss any that fall off back on.

2) Draw circles around each; nudges and bumps now are part of the plan, so don’t sweat them. Think of them as an additional randomizer.

3) Add up the total, and get your area theme (see note above). Everything else is predicated on these themes; think in terms of it. Take a moment to roll on the sparks tables and see if anything starts to gel. Choose any one of the basic d4 options, and rewrite it to better reflect your current area’s theme, and any context you already have, like this is a bandit fortress, or there are ghosts around; repeat this up to four times. Don’t worry about eliminating options; you can add those in yourself later.

Mine’s a 64, total, so “Wrath” is my area theme. I roll 3-5 and 3-3 for my sparks, so “haunted” and “hedonism”. I don’t have a lot of context, beyond that somewhere in this dungeon is the lost crown the PCs are seeking (probably). My world has a lot of techno-magic and a lot of angry ghosts, and a lot of layers (literally). I’ll keep those in mind as I design. I’m also going to replace 2 and 4 with “signs of a ghost” and “dug up technology”.

4) For each, draw short marker lines from any visible points. Don’t sweat this; prioritize weird points (like the ones under the numbers on d10s) and then ones off the top facing’s shape. Then note the number and die size, any other visible numbers (numbers you can see from where you’re sitting on that die, write them smaller), which direction is it readable: as normal/upright (r), sideways (s), or inverted/upside down (i). Draw an arrow in this direction. 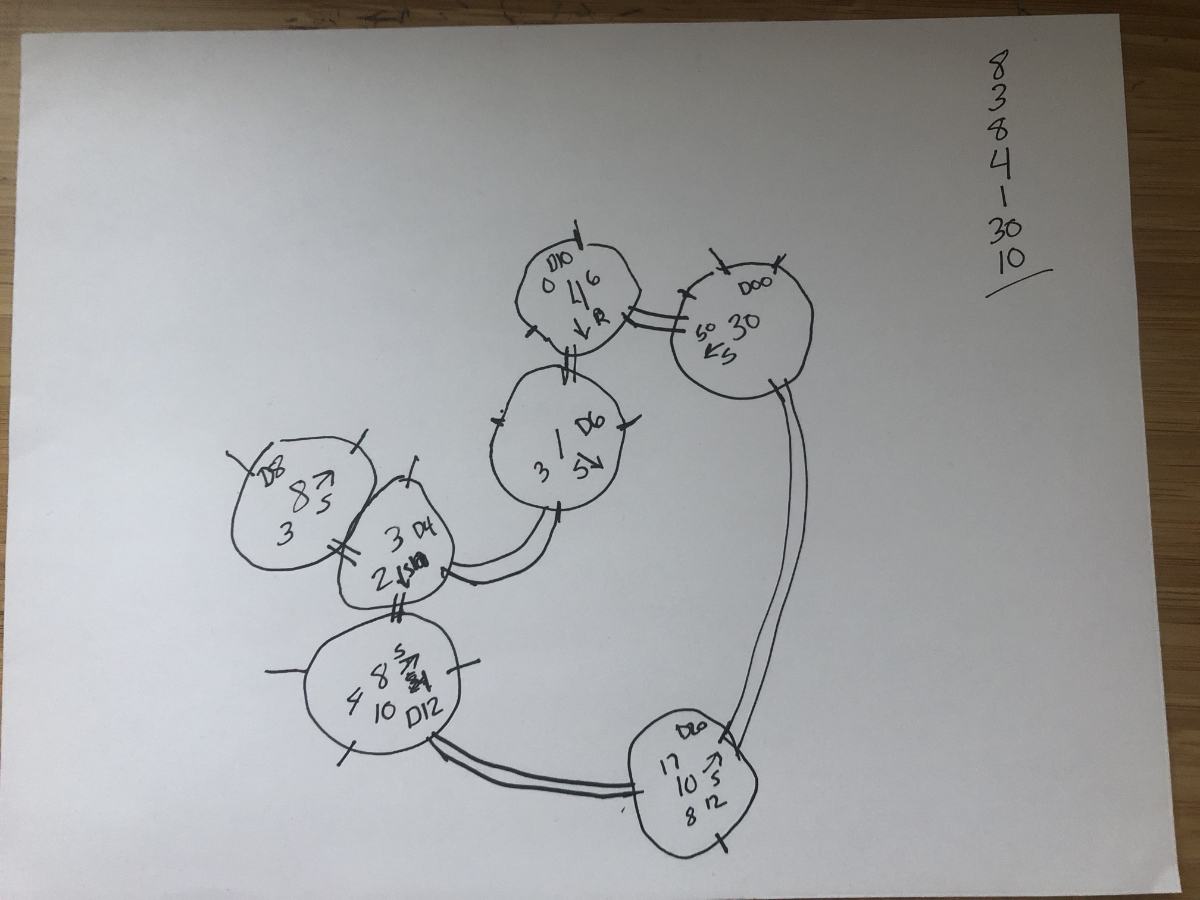 5) Connect halls; do logical joins (where one line just touches another or a node) first, then look for intersects on the short markers (don’t sweat this). Try for a rich number of joins, not a ridiculous number. Choose a starting room, but be open to changing it later.

6) Roll two concepts and two dangers, and place them in pairs in tentative nodes, if you can, or just list them for now. Choose one node and combine both concepts, with a twist, there.

1) Start with the d4. The top number is the room’s contents, as below. If the lower left number is odd, add an encounter, puzzle, or trap to all odd numbered nodes, otherwise, add them to even numbered nodes (treat the d00 as 1-10). The number to the lower right tells you the average threat of the area (1 is negligble, 2 is on par with the PCs, 3 is a good challenge, and 4 is overwhelming).

My d4’s minor left is a 2, minor right is a 1, so this area will feature minor foes.

Move to your starting room. Consider each node’s number; if it’s more than half the possible total, something here is animate (otherwise, you decide). If it’s max or minimum, there’s something of value present, too. Then read the number on the corresponding table, using the die size’s title as a guide to interpret the result. For example, on a d12, “library, lab”, a 3 is water, perhaps ruining books, or maybe magical potions. On a d00, “prison, trap”, a 2 (a way out) could be a secret exit from a cell, or an already sprung trap. Read any extra visible numbers in the same way, or swap them out for sensory impressions (seperate digits, ie, 19 is 1 and 9).

Play the node’s results straight or reversed/subverted, depending on the die orientation. For “sideways”, either make this node more extreme, or link it to another area. If any of your orientation arrows point directly along a join, trap, block, or otherwise make that hall more extreme. Finally, if you see any places you’ve got an arrow pointing towards or aligned with an unconnected join, consider if a secret room could go there.

Putting it all together

Looking at my map, the d20 room is a 10, right at half, so I decide nothing’s alive in here, and it’s even, so something special – maybe a puzzle. It’s not max or minimum value, so nothing of value. A 10 on the d20 chart is “animal; farm, trap, lair”. Given the context, I decide a cave bear has made a lair here, but it’s not present. My orientation is sideways, pointing directly down a hall, so I’ll intensify this room (there’s two bears) and describe claw marks at head height along the walls of that corridor.

The d00 room is a 30 (treated as a 3 except when totalling up for theme), sideways again, with a small 50 (5). This die size means this is a prison of some sort, and less than half means again, my pick if anything’s alive; a 30, or 3, is “water”, and a 50, or 5, is an iron cage. I decide I’d like to have one of the bears caught here, in an iron-jawed trap, weak from the draining poison in the water that runs northwest, to the d10 room (foreshadowing more water over there).

The d10 room, storage or utility, is a 4, with a small 10 and 6, nothing alive, and also upright, so no surprises here. 4 is remapped to dug up technology, 10 is expensive gear, and 6 is raw materials. The slurry of poisonous, draining water is washing around a glowing device, cracked open, a sword forged from the innards resting skewered through it, and enough materials to make another. The d4 says there’s an encounter here, and I need a fast but no armor enemy (who is fiery) so I decide there’s a radioactive serpent in the water.

The d6 room is a 1, minimum value, so something of value here, with a minor 3, and sideways, so I’ll foreshadow something. A 1 is “empty” and a 3 is water. I need a little more context so I roll a spark; 2-4, fungi. There’s luminescent moss here, moss that neutralizes the poison in the water and allows someone to wield the sword.

The d4 room is a 3. The minor 2 and 1 have already been handled, as part of setup, and while I could use them anyway, it’s been a while since we had an empty room. So this is a water room too, with nothing much else of note, except two paths to choose from.

Moving northwest, to the d8 room, and 8, with a minor 3, and sideways. This is a max value room, so something of value, and even, so an encounter. The minor 3 means more water. I decide to move the dead cave bear here, animated grossly by radioactive magic. Like the serpent, it is also radioactive/poisonous, but it is not fast or unarmored. Its bones will continue radiating magic for some time, proving temporary (but valuable) benefits.

The final room is the d12, library/lab, connected to the d4 and d20. It is 8, stacked canvases, with a minor 5, 4, and 10, for collected books, old tech, and a single grimoire. I decide to replace the 8 with a sensory detail; I compare it to the sensory chart, for “scent” and then describe the smell of mildew as most of the books have rotted into a soggy mass, leaving just the grimoire resting atop a spidery cage of ancient tech that keeps it floating.

You can weight the types of rooms by adding more dice and removing ones that don’t fit your context. For example, for a hardscrabble military outpost, you might remove the library dice, or add more d6s for more sleeping areas, or in a mine, more d20s for more “purpose of the place” focused spaces. You could also choose to replace one of the room types; just make your own table! Don’t be afraid to add in logical elements, either; if you need stairs down (or up) or a hole in the ground, declare it. You can also use the provided oracle (based on Abominable Fancy’s How’s It Going die/WoDu’s Die of Fate) to answer yes/no questions like “are there stairs here”.

After running the dungeon above, adjusted a bit for my context, I’d also suggest leaning on other resources for traps and puzzles; the seed/spark lists are useful there, but more work to generate than a drop-in table would be.